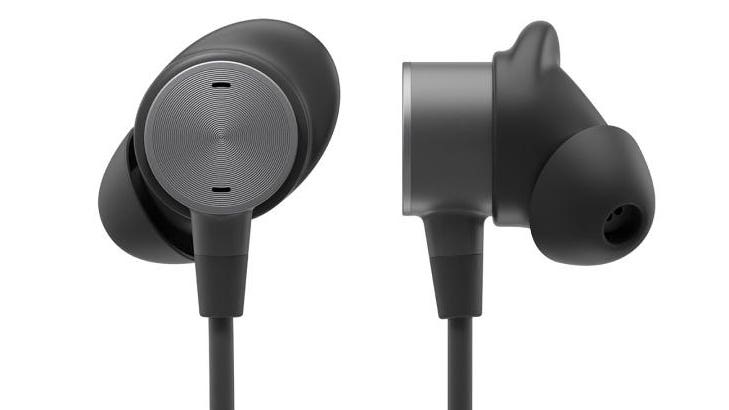 Do you use a headset when you’re on Zoom or Microsoft Teams? There are some great models on the market but not everyone likes wearing headphones. Let’s face it, they do look a little nerdy and some people don’t like having their hair messed up or simply don’t like the feeling of wearing over-the-ear headphones. Whatever your reasons, what are the alternatives if you don’t want a conventional headset.

The new Logitech Zone wired earbuds have been specifically designed to make video chats and live streaming more convenient. They have advanced noise-canceling microphones built into the left earbud which can capture the user’s voice clearly. The earbuds can also be plugged into a computer using the USB interface that comes with the earbuds, or they can be plugged in directly to the jack plug on your smartphone if it has one.

The Zone Wired earbuds come with four sizes of ear gels so you can choose the perfect fit for each ear to optimize the acoustic performance and noise isolation. Even the cable length is adjustable with a clip above the Y-joint. At this point, I must declare that my ears are a peculiar shape and I wasn’t able to get the earbuds to fit snugly in my ears but don’t let that put you off. You may not have ears like mine so bear this in mind when reading my review.

The sound produced by the earbud is a little thin to my ears but remember that I was having trouble because of my ears. Each earbud features a PET+PU driver material for clearer sound with less distortion. The drivers used neodymium magnets to deliver a louder sound. Additionally, there are two preconfigured EQ settings, one that’s optimized for voice clarity while the other can be used for music, the design of the in-ear earbud should be effective at passively cutting unwanted external noise and minimizing sound leakage.

The earbuds also offer adjustable sidetone – that’s the amount of your voice that’s fed from the microphone to your ears – so you can speak without feeling the need to shout. Connection is either via a 3.5mm headset jack or they can connect to a USB-C port. There’s also a USB-C to USB-A adapter bundled with the earbuds so you can use the Zone Wired earbuds with a computer that doesn’t have a USB-C port.

When plugged into a computer, there’s an inline remote control that can be used to adjust the volume levels, mute the microphone, answer/end/reject calls and play/pause music. LED indicators provide easy confirmation of the key functions. A button can Activate Microsoft Teams functions with the Microsoft Teams version or choose there’s also a UC version of the Zone Wired earbuds which work seamlessly with popular UC platforms.

To get the best from the Zone Wired earbuds, Logitech has developed Logi Tune, software that can be used to set up, control, and customize the earbuds. There’s an elegantly intuitive dashboard, a control for adjusting sidetone, a 5-band graphic equalizer (Windows only). Finally, Logi Tune can be used to update the firmware of the earbuds to keep them up to date.

Verdict: These Zone Wired earbuds from Logitech make an excellent alternative to an over-the-ear headset. They are far less noticeable and produce a clear sound and have very effective MEMS microphones which have noise-canceling properties to make the user’s voice clearer. The fit was a little problematic for me, but I think they should be fine for most people’s ears. Of course, you could use regular earbuds as a headset but the Zone Wired from Logitech have a sidetone function so you can hear your own voice when speaking. There’s also an inline remote control. There are two versions of the headset, one certified for Microsoft Teams and the other for UC platforms.