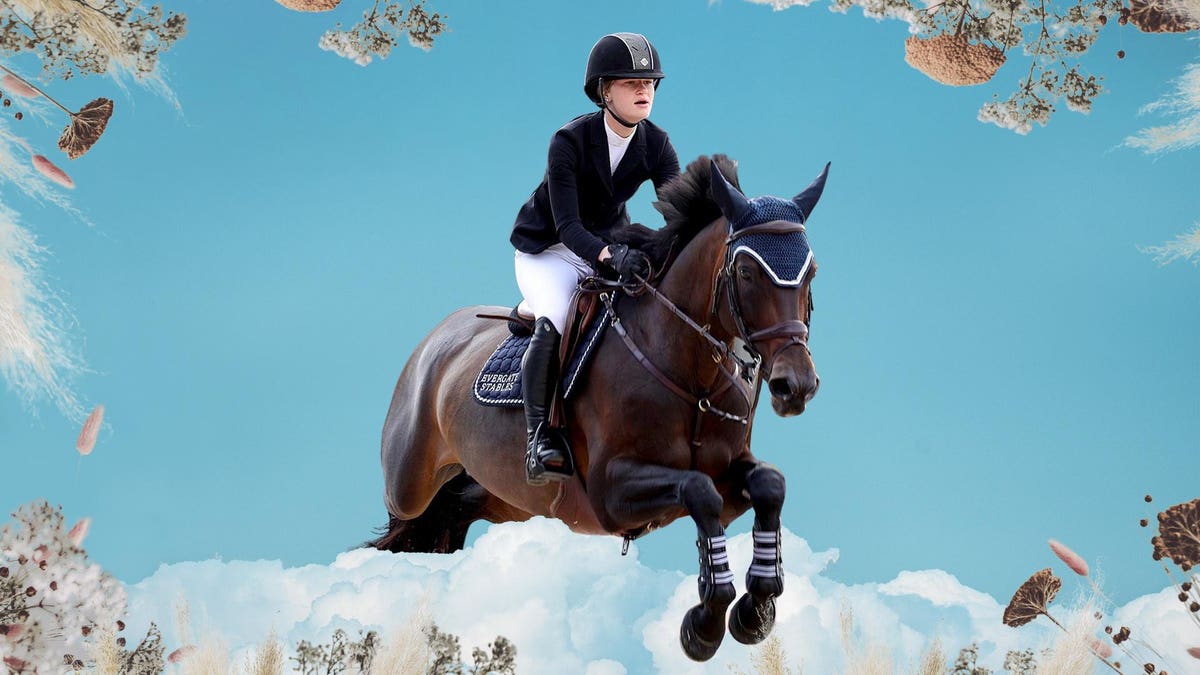 The area, which has its own “Billionaires’ Dirt Road,” is located just 55 miles north of New York City and home to more than half of the county’s agricultural land. Stretched out over roughly 23 square miles, it is just about the same size as the island of Manhattan but with a population of roughly 5,200—not counting all the horses and alpaca.

It helps that residents respect others’ privacy. “One of the nicest parts of North Salem is people don’t count other people’s money,” says the town’s deputy supervisor Peter Kamenstein. “If you want to be left alone, you are left alone.”

Residents have long sought to protect North Salem’s rural identity.  In 1974, a group of property owners created the North Salem Open Land Foundation, which has acquired 858 acres in town and holds conservation easements over another 500 acres. The foundation gets support from some of the town’s wealthy residents who are also board members—including McDonald’s franchise multimillionaire Bruce Colley and Target heir Duncan Dayton, who sold more than 140 acres to the Gates family. After philanthropist Ronald Stanton, founder of petrochemicals company Transammonia, died in 2016, two of his monied neighbors—Dinan and financier Steve Rattner—reportedly purchased his hundreds of acres to ensure that no one else developed the land. It also helps that nearly all of these wealthy landowners get tax benefits along with their huge parcels of land, either from putting acres into conservation easements or qualifying for agricultural exemptions.

“Everyone appreciates North Salem,” says longtime resident and head of the town planning board Cynthia Curtis, “and it wouldn’t be this way if not for the people who choose to live here and own the large parcels.”

*Note: I am a resident of Croton Falls, NY, a hamlet of North Salem.

Meet some of the wealthiest property owners riding high in North Salem.

North Salem was a fitting setting for the glamorous October 2021 wedding of Jennifer Gates and Nayel Nassar, both professional show jumpers. The reception, where Coldplay, Paul McCartney and Alicia Keys all reportedly performed, took place on a giant field in three temporary glass structures across from her sprawling Evergates Stables. Through LLCs, Bill and Melinda Gates quietly spent at least $34 million buying up several properties on picturesque Mills Road in recent years and gifted it to their equestrian daughter. In 2018, they purchased a 124-acre farm from Target heir and race car driver Dayton Duncan for nearly $16 million. Months later, the Gateses bought their neighbors’ home for $2.5 million, paying three times the 2008 price to secure the unlisted property. Then in September 2020, the family paid Duncan another $15 million for 22 acres directly across the street (roughly 18 times what the property had sold for 12 years earlier), to further secure their privacy. It was on those fields that the wedding reception took place.

A year before he became mayor of New York City, Michael Bloomberg bought the Salem Sunshine Estate in 2001 for $3.65 million for his then-17-year-old daughter Georgina. The property, which had been the site of The North Salem Circus, one of the oldest in the nation, was near Old Salem Farm, where she had grown up riding horses. Since then, Forbes estimates the family has spent $20 million buying up more land, building a new barn, caretaker’s cottage, in ground pool, tennis court and indoor riding ring.  “It’s a beautiful place that I just feel happy and safe here and very private,” Georgina Bloomberg said in a 2019 video. “Not much around here in North Salem, just lots of horses.” A member of the bronze medal-winning U.S. national team at the 2015 Pan American Games, she lives at Gotham North with her son and a menagerie of rescue animals including nine dogs, two cows, two mules, a goat, a pig, a rooster and, of course, a number horses. “I have a strict rule,” the 38-year-old Bloomberg has said of her four-legged family members, “they get fed before any humans do.” Despite all these animals and the operating farm, the Bloombergs, unlike many others, have never filed for an agricultural exemption that would lower their taxes.

Through an LLC that hid his identity, the 72-year-old actor paid just under $10 million in January 2021 for an historic 26-acre North Salem estate. Inspired by English manors, the stately Georgian home was designed by notable architect Mott Schmidt and built for a Woolworth heir in 1934. The property has a gym, a wine cellar, an outdoor pool and an indoor lap pool built in a former greenhouse.

Billionaire money manager Jamie Dinan and his wife, Elizabeth Miller, bought a 52-acre farm, called Staysail Farm, for $11 million in 2005 and have since spent several million on, among other things, an indoor equestrian arena and 20-stall barn. (Like a number of other billionaires in North Salem, the couple are involved in the local equestrian community—their daughter Katie was a professional show jumper.) Dinan—who owns a minority stake in the NBA’s Milwaukee Bucks with his North Salem neighbor Wesley Edens—and his wife also purchased North Salem’s beloved Vox Restaurant, in 2019. While Vox’s old building was knocked down in August due to extensive structural problems with the foundation, Miller has publicly promised to still bring a “wonderful venue” to the town.

Cofounder and CEO of the world’s largest asset-management firm, BlackRock, Larry Fink and his wife, Lori, an equestrian, bought Finch Farm from actor Stanley Tucci in 2004 for $3.7 million. Since then, the Finks have purchased seven more parcels in North Salem, including one picked up from the late children’s book author Maurice Sendak and another 27.2 acres bought from the town’s deputy supervisor Peter Kamenstein for $5.4 million in 2019. Forbes estimates they have also spent more than $6 million restoring and fixing up the historic main house, rebuilding the barn and adding a two-bedroom guesthouse. Approximately $1 million was spent on a swimming pool and cabana. Fink’s BlackRock cofounder Ralph Schlottstein also owns a house in North Salem.

A onetime New York Times journalist turned financier has been investing Michael Bloomberg’s personal and philanthropic assets for the past decade. He’s been a neighbor of the Bloombergs even longer. Rattner and his wife, Maureen White, bought Monomoy Farm in North Salem in 2005 for nearly $5 million and then apparently spent another $3 million building an indoor riding arena and 10-stall barn, among other improvements. Altogether he owns more than 300 acres in town.

The famed composer, who wrote the music for more than two dozen Disney movies and won 8 Oscars for his work on The Little Mermaid, Beauty and the Beast, Aladdin and Pocahontas, has lived in North Salem with his wife, Janis, for nearly 30 years. Their 49-acre estate features Chinese dragons on its front gate, a garden labyrinth and a $100,000-plus “tortorium”—a solarium with heated floors that has housed their pet tortoises. Menken, 72, apparently continues to work from his home studio on such new projects as a sequel to Enchanted and a prequel to Beauty and the Beast.

The son of a taxi driver, Glenn Dubin made his fortune at investment firm Highbridge, which he cofounded and sold to JP Morgan in 2004. Attracted by the low-key nature of the town and its focus on conservation and open lands, as well as the proximity to Manhattan, he and his wife, Eva, an internal medicine doctor and former Miss Sweden, spent an estimated $12 million for their country home and 275 accompanying acres in North Salem in 2007 and 2008.

Old Salem Farm, which the Hakim family has owned since 1994, is a 120-acre horse-show venue with a storied history. (Billionaire daughters Georgina Bloomberg, Katie Dinan and Jennifer Gates have all competed there.) A group of retired policemen reportedly built the original barn in 1964, and actors Paul Newman and Joanne Woodward briefly owned the property from 1981 to early 1984. Real estate developer Kamran Hakim, who immigrated to the U.S. from Iran in the 1950s, purchased both Old Salem and an adjacent property in the’90s and spent millions improving the equestrian facilities. “My siblings and I rode horses as kids,” says Scott Hakim, who manages the properties for the family, “and when we saw the facilities at Old Salem Farm, we wanted to be caretakers of its continuation.” The family also bought the 286-acre Grand Central Farm in 2013 for $14.9 million as an additional potential resource for their equestrian portfolio. It includes a 22,000-square-foot barn complex on property the federal government had seized from Paul Greenwood, a former North Salem town supervisor and financier, who was serving time in prison for securities fraud.

The former co-head of private equity at Blackstone, who now runs his own investment firm, CC Capital, Chinh Chu bought his 33.8 acre estate for $4.25 million in 2011. He also made a host of lavish improvements, including adding a ballroom, Japanese garden and tennis court. Plus, he added an estimated $2.3 million garage for his car collection and a zip line. That last addition was probably not the greatest idea: At a summer party at Chu’s estate in 2019, Serbian model Simona Andrejic took a spin on it and smashed into a tree, fracturing her pelvis in multiple spots. The zipline has since been taken down.

In 1994, the longtime late-night host bought his 88-acre property, including its 8,300-square-foot home with seven bedrooms, six fireplaces and a pool. He then paid nearly $5 million more for 20 adjacent acres in 2007. Letterman has been known to jog through town, and when his son played in the local Little League, he showed up at the baseball picnic.

A co-owner of the Milwaukee Bucks (with neighbor Jamie Dinan) and a former partner at BlackRock (run by neighbor Larry Fink), billionaire Wes Edens made North Salem his country paradise in 2013, when he and his wife, Lynn, began buying up properties. (The couple eventually acquired seven parcels for an estimated $18 million.) Today, Lynn Edens owns and operates North Salem’s Little Creek Farm Alpacas, home to Snowmass Accoyo America and Little Creek Herds, which primarily breeds and sells alpacas for the commercial fiber market.

A 60-year veteran of Neuberger Berman and a senior portfolio manager with its Straus Group, Schwartz is the town’s largest land owner. Apparently a longtime equestrian, he owns an estimated 800 acres. He reportedly produces maple syrup on the property.

Multimillionaire McDonald’s franchise owner Eugene Colley and his wife, Lois, bought their Colonial-style home more than three decades ago and the family has been deeply involved in North Salem’s fox hunting scene for years. Eugene and their son, Bruce, are both masters of the Golden’s Bridge Hounds, one of the oldest fox hunting clubs in the country. Eugene Colley was also part of a group that bought up and then donated a 114-acre parcel of land known as the Baxter Preserve Loop (or a racetrack to some locals) to the North Salem Open Land Foundation in 1979. Also an avid polo player, Bruce Colley is best known for breaking up Andrew Cuomo’s marriage to Kerry Kennedy, with whom Colley allegedly had an affair. In 2015, the family endured a much greater tragedy when Lois Colley, then 83, was bludgeoned to death by a day laborer at Windswept Farm, their vast North Salem estate. (The killer was later sentenced to 22 years to life in prison).